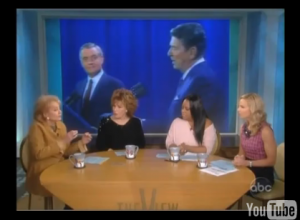 Barbara Walters has chimed in regarding Ron Reagan‘s much talked about new memoir – My Father at 100 – in which he claims, among other things, that his father’s struggle with Alzheimer’s began while he was still in office.

Walters acted as moderator of the 1984 debate between Democratic presidential nominee Walter Mondale and Ronald Reagan – which falls within the time frame Ron Jr. gave for the beginning of his father’s disease – and interviewed the President several times. On yesterday’s episode of The View, she shared why it is that she thinks Ron Jr. is full of… so many jelly beans:

Ron, Jr.’s half-brother Michael said this is not true. This didn’t happen. I’m going to say something that I probably saw more of President Reagan in those years than either of his sons. He was not really close to them. And I did interview after interview. I didn’t see any signs of dementia or Alzheimer’s or whatever until after he left office. Now, this morning, Ron Reagan, who is a very pleasant fellow and I like him a lot, was on ‘GMA’ and he said – he sort of disputed what he said. He said I didn’t say that. I said exactly the opposite. I did not see symptoms of dementia or anything like that when he was in office. I wasn’t thinking, ‘Gee I’m seeing signs of Alzheimer’s here.’ So his half-brother says he said all of this because he’s trying to sell books.

The young Reagan has received quite a bit of backlash for his claims, both from others close to the late President during the 80s, his brother Michael Reagan (whom, despite Walters’ description, is more aptly described as Ron’s adopted brother, not half-brother), and the folks at Good Morning America. Not to mention more than a few Mediaite commenters.

Watch video from yesterday’s The View: