Sarah Palin To Barbara Walters: The Media Has Shaped My “Polarizing” Persona 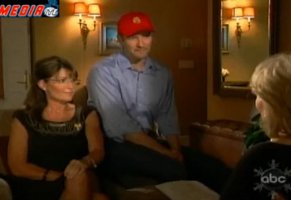 Sarah Palin was, for the third straight year, named one of Barbara Walters’ 10 most fascinating people of the year. The full version of Walters’ interview with Palin, snippets of which were released already, aired on ABC tonight, and they included another question on Palin’s possible presidential aspirations, more shots at the media, and even an appearance from Palin’s husband, Todd.

Walters, like so many others, tried to get an answer out of Palin as to whether she’d run for president. Like so many others, she left without a concrete answer. Palin more or less stuck to what she’s said so far, saying, “I will run for president if I believe I have the best shot to win the race.” For now, she says she’s just “looking at the lay of the land”…though she did say she thinks she could beat Barack Obama.

Palin also took plenty of shots at the media, as she is wont to do. “I hear the comment out there that’s made often that I’m polarizing,” she said – and she thinks it’s because “the media has shaped that persona.” Additionally, she said the media perpetuates “a misconception…about what my values are, and what the positions are that I support.” She also said the media “ginned up” the idea that she’s uninformed in a portion of the interview released earlier.

“Aren’t these boys just silly with their accusation that Sarah Palin, the hockey mom from Wasilla, cost the United States Senate power base?”

The “boys” part is interesting, of course (reinforcing the “boys’ club” attitude in politics that presumably needs changing), and the “hockey mom from Wasilla” line is doubly smart. Palin knows how to promote her brand, and her runaway success in that area is one major reason she’s as fascinating as she is.

Eventually, Todd Palin came out for part of the interview. The two laughed off rumors of marital strife (as they’ve done before), and he said his wife is “definitely qualified to be president.” He also offered an…interesting response to Walters’ request to describe Sarah Palin in three words: “great wife, good mother, loves her country, and she’s such a great example for our family and other families.” (19 words, if you’re counting.)

Sarah Palin’s response to the same request was, of course, much more polished: “determined, patriotic, faithful.” Certainly, this interview did nothing to change the image of the Sarah Palin you either love or hate, and enough is still up in the air for the next year that we fully expect her to be on the Most Fascinating People of 2011 list as well. Video of the interview, via ABC, below.