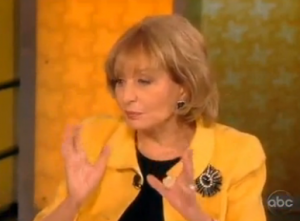 Well, it’s Thursday, and nobody on The View had talked about vaginas all week, so I suppose this was overdue. Barbara Walters participated in a 20/20 special on plastic surgery that will air tomorrow night, in which she asks the really tough questions, such as “Is it true that you can get a bigger booty?” And “Is it true that black don’t crack?” To make things a bit more head-scratching-ly weird, the show aired a snippet of her interview with Joan Rivers (the patron saint of plastic surgery) for the program. Here’s what went down:

Barbara: What do you say to people who say, ‘Joan Rivers, you have just done too much?’
Joan: “I say mind your business. And if it’s a man I always look at the wife, who is usually 11 years old with fake breasts.
Barbara: *Giggling* Okay. And what’s the most extreme kind of plastic surgery that you’ve heard of?
Joan: Oh, uh, vaginas now.
Barbara: What?
Joan: They’re tightening their vaginas. Well, vaginas can get loose—
Barbara: I see.
Joan: If you’ve had a couple of children, and, you know, you’re in an earthquake and you suction yourself suddenly to the floor — time for tightening
Barbara: I never thought I would ask you this question, Joan. Have you had your vagina tightened?
Joan: Why bother? There’s no hope, Barbara.”

There you have it. I know what I’ll be doing tomorrow night at 10/9 Central! You can see the clip here via ABC: