Barbara Walters On Stacey Dash Backlash: ‘If She Were White, This Wouldn’t Have Happened’
video

Barbara Walters On Stacey Dash Backlash: ‘If She Were White, This Wouldn’t Have Happened’ 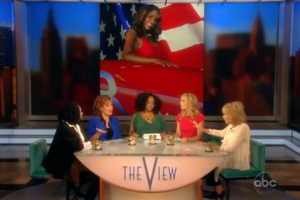 On Wednesday, the ladies of The View discussed the backlash actress Stacey Dash has received since tweeting her support for Mitt Romney. Barbara Walters argued that Dash’s remark wouldn’t have elicited such a negative reaction if she were white. Whoopi Goldberg staunchly disagreed, comparing Dash’s incident to the threats made against Bristol Palin.

“In America, where we all live,” Goldberg said, “we have the right to say, ‘Listen, I have a different opinion’ — without having some bonehead sitting in their house talking about, ‘You should be thinking like I think.’ No! That’s not America.”

She went on to note that she got her “behind handed to her” when she interviewed Romney when he’d first started campaigning, and she said he’s somebody she could vote for. “You would have thought I pooped on the front lawn of the White House,” Goldberg remarked.

“Is this because it’s expected that all black people will be Democrats?” Walters asked.

“It’s because people have gotten so solidified in left and right that they’ve forgotten that there is a middle,” Goldberg argued. “I don’t know that it’s about race because what I’ve discovered on Twitter is that not everybody who says they are what they are, is what they are.”

This kind of reaction is coming from people sitting around who’ve forgotten “who we are as a nation,” she added, defending Dash as a nice girl who did nothing wrong.

Walters interjected, asserting, “The reason she’s being attacked is because she is black, and the feeling is, black people should not be voting for Romney.”

“That’s the way it’s been portrayed,” Goldberg countered. “She’s being attacked because she has a different view from other people. […] It’s the same with Bristol Palin, what the hell! What’s wrong with us that this is what we do?”

“My quiet point is,” Walters responded, “if she were white, this wouldn’t have happened. I know you don’t feel that way.”

“The feeling was that because she was black, she automatically should have voted for the black man,” she added. And so they agreed to disagree.