Barbara Walters Takes Issue with Politicians Swearing on a Bible 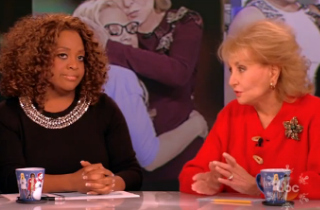 During a segment of The View Thursday morning, host Barbara Walters expressed her concerns over politicians swearing on a Bible upon taking office, noting the importance of “the separation of church and state” as an American value.

The comments came up as the View crew discussed Sen. Mark Pryor‘s (D-AR) new political ad apologizing for his Obamacare support as well as insisting that the Bible should be a guiding presence in politics.

That is very true, but it starts almost with the oath of office which usually ends with “So help me God.” Now, most presidents swear on a Bible before taking office, even though we have the separation between church and state. You see it again and again. You don’t have to use a Bible. Teddy Roosevelt didn’t. John Quincy Adams swore on a law book and Lyndon Johnson took the oath on a book he thought was the Bible. We don’t know what the book was. […] We talk about the separation between church and state and almost every president ends up saying so help me God.

[h/t NewsBusters, who obviously did not like her assertion.]