Barbara Walters to Letterman: Monica Lewinsky Could Be Joining The View 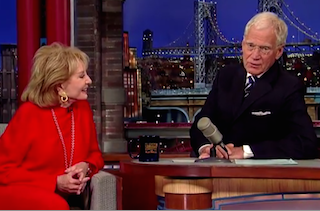 Did Barbara Walters let something slip that she wasn’t supposed to last night? The veteran journalist sat down with David Letterman Wednesday night before she makes her retirement official this Friday. And during a discussion about the resurgence of Monica Lewinsky, Walters hinted that the idea of President Bill Clinton’s most famous intern becoming a host on The View might not be as far-fetched as you would think.

Letterman told Walters that he has started to “feel bad” for spending so much time making fun of Lewinsky during the scandal over her relationship with the president in the 1990s. “Myself and other people with shows like this made relentless jokes about the poor woman, and she was a kid!” Letterman said.

While Bill Clinton has been able to move on, Lewinsky is still “stuck” in her past, Walters said. And as she wrote in her new Vanity Fair article, the scandal has made it impossible for her to get the kind of job she deserves. This led Letterman to ask Walters if she ever considered putting Lewinsky on The View.

A hesitant Walters replied, “I won’t tell you what we have done, but it would have been possible.” When pressed a bit more, Walters said, “I think it would be great if she were on The View, but I wouldn’t expect it tomorrow.”

“Maybe she could take my place,” Walters half-joked. “You know, The View with Whoopi Goldberg and Monica Lewinsky.”

And if that doesn’t work out, Letterman assured Lewinsky she always has a place in the Late Show band if she wants it. Well, at least until Stephen Colbert takes over.