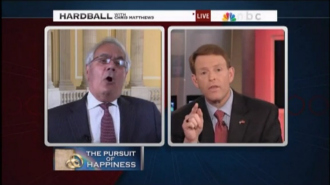 Matthews began the segment by asking Perkins about a previous statement he made to CNN saying he doubts his children would become gay because he and his wife have taught them the proper way to interact as human beings. “What do you mean by that? If he’s gay, he’s gay,” Matthews asked.

“When you look at the social science research, there is not conclusive evidence that this is genetic or biological. it is a complex mix of environmental factors. And when you can control many of those environmental factors, you can teach your kids certain ways, you can protect them from certain experiences and certain things that could happen to them that could lead them down a certain path,” Perkins said, implying that homosexuality is something parents can control.

According to Mr. Perkins, it’s Dick Cheney’s fault that his daughter was a lesbian. First of all, I don’t think there’s anything wrong with it, and secondly, the notion that Cheney parented in an inferior way to Mr. Perkins is an absurdity. I don’t think Mr. Cheney taught his daughter to act “improperly” and she became a lesbian. I know of no such evidence that the parents have an effect one way or another. I don’t know anybody for whom their sexual orientation wasn’t involuntary, whether people are straight or gay.

Perkins doubled down, saying that he believes parents play a role in teaching children “appropriate” behavior, and he and his spouse teach their children from the Bible to behave a certain way.

Frank correctly pointed out that Perkins is simply delusional to believe his children couldn’t become homosexual simply because he teaches them the “proper” way to act according to the scripture.

As the debate turned to same-sex marriage, Perkins said “I believe that changing the definition of marriage is problematic.” Matthews cleverly pointed out that the Mormon church changed definitions from polygamy to monogamous marriage, asking Perkins if that change is problematic, but never let him answer.

Eventually the discussion touched upon whether same-sex marriage leads to dire social consequences (hint: it doesn’t). Frank pointed out that we have had same-sex marriage since 2004 and none of the dire consequences have come true. He added that “the notion that because two women are in love, that’s going to somehow undermine the marriage of a man and a woman makes no sense.”

As the topic turned to homosexual parenting, Perkins asked Matthews why marriage exists, and then explained that it is because marriage is the place where children are created. And only a man and woman can reproduce.

Frank shot back: “Nothing about letting me marry Jim is going to interfere with anyone else’s ability and right to have children. Many marriages don’t produce children. People who are beyond the age marry. People who are infertile marry.”

When asked whether gays should be allowed to adopt children, Perkins insisted that “Children need a mom and a dad.”

Wrong. A recent study of adolescent development and social behavior actually showed that the children of lesbian couples did just as well, if not better, than children raised by heterosexual parents.

Check out the heated debate below, via MSNBC: