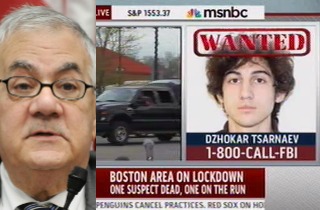 Former Rep. Barney Frank (D-MA), who served his Massachusetts District in Congress for 32 years before retiring this year, spoke to MSNBC host Alex Wagner on Friday about the ongoing manhunt for the surviving alleged bomber of the Boston Marathon. Frank said that, just like in Texas where two prosecutors have recently been murdered, the Boston attacks are a reminder that there are “morally deformed” people among us. He said that this fact is “not new.”

Wagner asked Frank how the community, which had appeared to embrace the Tsarnaev brothers prior to their murderous attack on the Boston Marathon, begin to “wrap its head around” the fact that these two men killed many of their own.

“It is what it is,” Frank replied. “The fact that there are among us, humanity, some people who are vicious, and violent, and morally deformed – we are aware of this.”

“The people of Texas are now experiencing the fact that, you know, two prosecutors were murdered by homegrown Texans,” Frank noted. “How do you process it? By understanding the reality that, first of all, there are going to be some people among us who are criminals. That, in a free society, there is this problem that we do not want to give up our freedom in anticipation of this.”

“Sadly, they get a chance to take the first shot,” Frank added. “The fact that there are among us a few terribly morally deformed people is not new.”