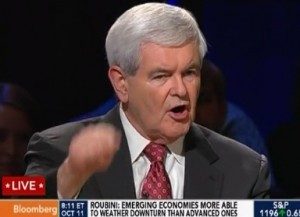 Former Speaker of the House Newt Gingrich ratcheted up the temperature at last night’s Bloomberg/Washington Post GOP Debate when, in response to a question about the financial meltdown, Gingrich suggested the jailing of Rep. Barney Frank and former Sen. Chris Dodd.

Frank shot back last night, noting that “It’s interesting, the charge is failure to stop Newt Gingrich and Tom Delay from deregulating,” and called the charge odd “even by Gingrich’s standards.”

The candidates were asked if they thought it was right that no Wall Street executives have gone to jail for the damage they did to the economy, and the predictable response was to blame federal policies that were abused, rather than the abuse itself, and the deregulation that allowed it.

Former Speaker Gingrich was asked if the Occupy Wall Street protesters have a legitimate grievance. “I think the people who are protesting on Wall Street break into two groups,” Gingrich replied. “One is left-wing agitators who would be happy to show up next week on any other topic, and the other is sincere middle-class people who, frankly, are very close to the Tea Party people and actually care.”

Here’s the clip, from Bloomberg TV:

Barney Frank responded quickly, in an interview with TPM:

Frank said Gingrich’s anger over his and Dodd’s role in the financial meltdown was absurd given that Republicans were in charge of the House and — excerpt for a brief period — Senate, from 1995 to 2007.He noted that he worked on reform legislation on mortgage in his first year as chair in 2007.

“It’s interesting, the charge is failure to stop Newt Gingrich and Tom Delay from deregulating,” he said. “This notion we caused the problem that started while they were in charge even by Gingrich’s standards is very odd.”

Frank speculated that Gingrich’s comments were borne out of frustration with his campaign.

“He’s been having a bad year, you know — this self-styled intellectual leader of the free world struggling to stay ahead of Michele Bachmann in the polls is unsettling him so he talks even sillier than he sometimes does,” he said.