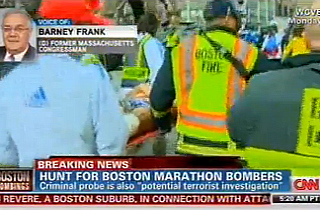 Reacting to Monday afternoon’s bombings at the Boston marathon, former Massachusetts Rep. Barney Frank (D) took the time to explain to CNN a point he finds very important: We should be gracious for a “well-funded, functioning government” in the wake of these attacks, especially because “no tax cut would have helped deal with this.”

When asked to discuss the recovery efforts ahead, Frank told CNN host John Berman that he’d like to make a point about which he has “felt strongly.”

“In this terrible situation, let’s be very grateful that we had a well-funded, functioning government,” the former congressman said. “It is very fashionable in America to criticize government, to belittle public employees, talk about their pensions, talk about what people think is their excessive health care.”

However, he said, “Here we saw government, in two ways, perform very well,” noting the “brave and rapid” cooperation between state and local government officials in the aftermath of Monday’s attacks.

He then went on to lambast fiscal conservatism, suggesting that budgetary restraint and tax cuts would have made an effective response more difficult: “No tax cut would have helped us deal with this or will help us recover,” he said. “This is very expensive.”

“This is an example of why we need — if we want to be a civilized people — to put some of our resources into a common pool so we are able to deal with this. And to deal with it, you can’t simply be responsive once it happens,” he continued.