Barney Frank On Low Congress Approval: ‘I Don’t Feel Guilty’ Because Voters Ask Us To Do The ‘Impossible’
video

Barney Frank On Low Congress Approval: ‘I Don’t Feel Guilty’ Because Voters Ask Us To Do The ‘Impossible’ 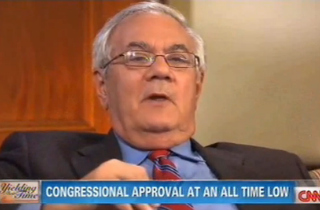 During a special edition of CNN’s State of the Union featuring four outgoing lawmakers, retiring Rep. Barney Frank (D-MA) offered up a harsh assessment for voters who are unhappy with the results of their electoral choices, saying that voters ought to do a “self-criticism” when displeased; and that he doesn’t feel guilty about Congress’s historically low approval rating because the voters give an “inconsistent set of messages.”

Host Candy Crowley asked Frank and other retiring lawmakers to address Congress’s approval rating nearing 10%. “Is that kind of hurtful to you all?” the host asked.

“People themselves are internally gridlocked,” Frank replied. “We hear from people cut the deficit, expand Medicare. We get a very inconsistent set of messages from them. So no, I don’t feel guilty at all, and I don’t feel badly,” he said.

He continued on to relay an anecdote from when he was in Boston’s City Hall four decades ago and had to listen to constituents complaining that “they wanted a swimming pool in a neighborhood and then complaining because the dump trucks were coming in and out digging out the swimming pool and it was bothering them.”

He concluded: “We do our best, and I’m not troubled by our inability to do what some of the them want us to do, which is impossible.”

Earlier in the program, the congressman said that the American public ought to do some “self-criticism” when they dislike the outcome of their electoral choices. “People act as if we’re in a bubble and we just were self-generated,” he told Crowley. “If the public doesn’t like the result, they should do a little self-criticism…. At any given time, America is governed by the results of an election.”