Barney Frank Talking Trash: Newt Gingrich Is A ‘Lobbyist And A Liar’
video

Barney Frank Talking Trash: Newt Gingrich Is A ‘Lobbyist And A Liar’ 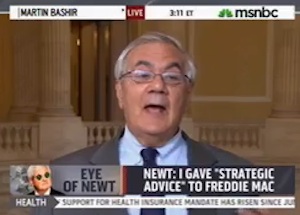 Appearing on MSNBC’s Martin Bashir on Wednesday, Barney Frank ripped into Republican frontrunner Newt Gingrich. “There are two ‘L’ words that apply with Newt,” Frank exclaimed. “Lobbyist and liar.” “Mr. Gingrich was reprimanded for lying,” Frank added. “He has a history of doing that and this is nonsense that he was being paid $1.6 million and maybe more to talk about history.”

Bashir asked Frank about the controversy over Gingrich’s previous work which some alleged to be lobbying. “Officials familiar with his work at Freddie Mac say that his role had nothing to do with lectures in history and everything to do with building relationships with Republicans on Capitol Hill. I have to ask you, isn’t that lobbying?”

Frank also took shots at the Republican presidential candidates, calling them members of the “Bum of the Month Club.”

“Every month, another third-rate fighter would come in and get beat up by Joe Louis,” Frank snarked. “Romney has become the inheritor of the Bum of the Month Club. You get Rick Perry who cannot remember about this and that. You get Herman Cain, now you get Newt, you had Michele Bachmann earlier. He is a very, very lucky man because he is apparently going to be the Republican nominee by default. It’s everybody else’s fault but his.”

Watch Frank’s lambasting of Gingrich and the other Republican candidates below via MSNBC: