Barney Frank To Occupy Wall Street: Where Were You During The Last Midterms?

Barney Frank Unhappy With Occupy Wall Street: Where Were You During The Last Midterms?
Twitter share button 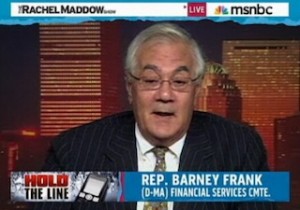 On Monday night Rachel Maddow explained how the Occupy Wall Street movement defied some traditional party lines, or in her words, protesters “aren’t exactly delighted with Democrats either.” She then introduced Rep. Barney Frank, who shared some frustrations with the protesters, saying “I’m unhappy when people didn’t vote last time blame me for the consequences of their not voting.” Frank echoed the thoughts made last week by former Gov. Ed Rendell who basically asked where were these folks during the last mid-term elections?

Frank has been himself a lightning rod for harsh criticism regarding the loosening of regulations surrounding mortgages, which some feel led to the very mortgage-backed security problems that led to a crashing of the U.S. economy back in fall of 2008. Many on the right have made the effort to make him the poster-boy for Democratic ineptitude.

For his part, Frank has always maintained that his position hasn’t changed, that his efforts were to fight the very deregulated policies that led to the crash. So for him to feel ire from Occupy Wall Street protesters — most of whom appear to be of the progressive stripe — combined with two years of conservative attacks…well, it put Rep. Frank in no mood!

Maddow asked if Rep. Frank believed if he thought that the Occupy Wall Street movement has “lit a fire under the Democrats at all?” Frank answered:

Well, first, I have to say that I wish there was some of that energy two years ago when I was fighting against the people who wanted to protect derivatives from regulation and were trying to weaken the consumer bureau. Rachel, I do have to say, some of us have been trying to do this for a while, and I have to be honest and say in 2009, I wish some of these people had been energized then and were helping us fight back against this effort. Because we got a strong bill, but it should have been stronger.

After then talking about the importance of presidential politics, and how it specifically affects the very laws and regulations vis a vis Supreme Court justices appointed by elected presidents, Frank went back to the protesters (rough transcript provide by TVEyes):

Yes, I hope there will be pressure to do even more, but I, again, want to be honest, simply being in a public place and voicing your opinion in and of itself doesn’t do anything politically. It is the prerequisite, I hope, for people getting together and voting and engaging things. and I understand some of the people on occupy wall street are kind of critical of that. They think that’s conventional politics. Well, you know, the most successful organization in America in getting its views adopted is the national rifle association. they are in many cases a minority. But in addition to everything else they do, they very effectively identify who the members of the congress are, the legislatures and vote for them.

So as I said, I welcome the Wall Street energy. I don’t agree with everything some of the people say. I agree with the general thrust of it. it’s not self-executing. It has to be translated into political activity if it’s going to have the impact. you know, I would just say, the last thing, we had an election last year in which people who disagree with them, and disagree with me and with you, got elected. I want to be honest again here. I don’t know what the voting behavior is of all these people, but I’m a little bit unhappy when people didn’t vote last time blame me for the consequences of their not voting.

Frank’s candid criticism of OWS protesters sounds eerily similar, if not much more nuanced, than what many, more conservative pundits have said. The groundswell of populism is a powerful and impressive thing. But this energy does not translate to a motivated voting block, then it may be all for naught.