Bashir Continues Anti-Thatcher Crusade: She Thought Mandela Was A ‘Terrorist,’ ‘At Ease’ ‘With Apartheid’
video

Bashir Continues Anti-Thatcher Crusade: She Thought Mandela Was A ‘Terrorist,’ ‘At Ease’ ‘With Apartheid’ 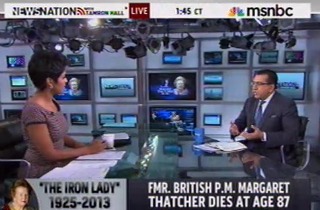 Since the passing of former British Prime Minister Margaret Thatcher was announced on Monday, MSNBC host Martin Bashir has appeared on many programs on his network with the mission of adding a critical perspective to the recounting the Iron Lady’s legacy. Bashir augmented his efforts to reinforce the notion that Thatcher’s tenure at 10 Downing Street was not wholly positive for the United Kingdom when he told anchor Tamron Hall that the late prime minister regarded South African leader Nelson Mandela as a “terrorist.” He added that Thatcher was “at ease” with that nation’s policy of racial segregation known as apartheid.

Bashir conceded that Thatcher was an “indomitable, formidable leader,” but noted that she also “did things that a lot of people objected to.”

“She regarded Nelson Mandela as a terrorist,” Bashir continued. “She was at ease with the notion of apartheid, which — many of us growing up in England as students during her period as prime minister — we were campaigning for the release of Mandela.”

Bashir accused Thatcher of exacerbating racial tensions in her own country as well. “In terms of policing,” he said, “if you were a non-white member of the minority, you felt the aggressive hand of the police – led by Margaret Thatcher – which resulted in some of the worst race riots that the country had ever seen in the 1980s.”

Hall noted that Bashir’s comments had resulted in his being scrutinized, in spite of their factual nature. “It is an immensely sad day,” Bashir added. “We obviously don’t want to speak ill of the recently deceased.”

“But the facts of the historical record do need to be placed center stage,” he concluded. “She was a divisive figure. There’s no doubt about it.”