Bashir Explodes At GOP Guest Who Voted Against Sandy Aid: ‘How Many Deaths Do You Need?’ 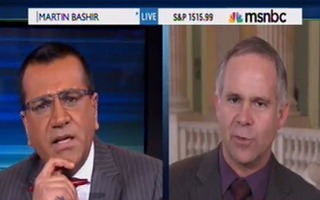 Rep. Tim Huelskamp (R-KS) got an earful from MSNBC host Martin Bashir on Wednesday when he appeared on his program for a wide-ranging interview. Bashir hammered the Republican congressman over his opposition to voting for aid to regions hit by Hurricane Sandy, asking the congressman precisely “how many deaths do you need” before you will vote for federal disaster aid.

Bashir recounted how voted against aid to Sandy victims because he opposed the decision not to cut other programs in order to create a aid package that did not add to the debt.

Huelskamp replied that much of those funds would not have been spent for up to five years. “How many deaths do you need?” Bashir asked again.

“You know it’s not about deaths,” Huelskamp replied. “Spending the money didn’t bring anybody back to life.”

“You can’t continue to borrow money every single day, like you want to do apparently, and the President of the United States wants to do,” Huelskamp continued. “How would you like to pay for your $54 million Mr. Bashir?”

“Please don’t impose decisions on myself,” Bashir countered. “I have no powers, as you know.”

The two engaged in crosstalk as they battled over the how necessary it was to offset funding for aid to disaster victims.