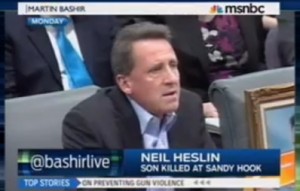 “Controversy” erupted Monday when MSNBC’s Martin Bashir Live aired a clip of gun advocates “heckling” Neil Heslin, father of late Sandy Hook Elementary schooler Jesse Lewis, as he testified before the Connecticut legislature. The clip showed Mr. Heslin asking the assembled spectators “Why anybody in this room needs to have done of these assault-style weapons or military weapons or high capacity clips,” but omitted what some felt was crucial context that made the spectators’ cries of “The second amendment shall not be infringed!” all okay. On Wednesday afternoon’s Bashir Live, fill-in host Ari Melber addressed the “controversy,” and played some additional context.

Apparently, the omission of “the father’s follow-up with dramatic pause and ‘Not one person can answer the question’” was reason enough for the outrageous behavior of those spectators to morph into outrage at Martin Bashir‘s staff, and anyone else who dared to call these idiots “hecklers.”

In all fairness, the omitted pause-and-quote makes a difference, but in equal fairness, the “full video” that conservatives dug up also doesn’t tell the whole story, and if you look at the longer clip that MSNBC played Wednesday afternoon, the totally-non-heckling gun nuts got a break from Martin on Monday.

“On Monday, on our program,” Melber said, “we aired a portion of a hearing where we heard from Neil Heslin whose 6-year-old son Jesse was killed at Sandy Hook Elementary School. We received a number of comments over the last few days, so we’re going to play the relevant portion in full.”

The clip that Melber played reveals that, seconds before the spectators began raining idiotic 2nd Amendment slogans (the Supreme Court has already ruled that it doesn’t apply to assault weapons) on Mr. Heslin, he told those assembled, “I don’t know how many people have young children or children, but just try putting yourself in the place that I’m in, or these other parents that are here. And having a child that you lost. It’s not a good feeling. It’s not a good feeling to look at your child laying in a casket, or looking at your child with a bullet wound to the forehead. It’s a real sad thing.”

It was then that Heslin said “I wish — I ask if there’s anybody in this room who can give me one reason, or challenge this question, why anybody in this room needs to have an assault — one of these assault-style weapons or military weapons, or high-capacity clips. And not one person can answer that question.”

Gun nut: “The second amendment shall not be infringed!”

Gun nut: “You shall not infringe our rights.”

Mr. Heslin then sadly, graciously concluded by saying “Anyway. We’re all entitled to our own opinion. And I respect their opinions and their thoughts. But I wish they’d respect mine, and give it a little bit of thought.”

If they had given it a little bit of thought, they’d have realized that shouting out unresponsive nonsense at a courageous, grieving father, while maybe not technically “heckling,” is disgraceful, and if they absolutely had to do it, they could have at least answered his goddamn question. Thinking (mistakenly) that you have a right to something doesn’t mean you need to have it.

Melber concluded by telling the audience that Martin Bashir wanted them to see the clip in full “so you can draw your own conclusion.”

The gun nuts got off easy.