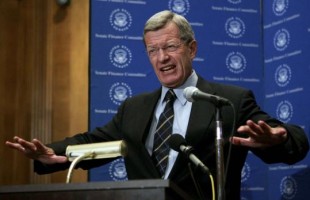 Senator Max Baucus‘ appointment of his girlfriend, Melodee Hanes, to the office of U.S. Attorney has the markings of a bona fide political scandal, yet the media’s coverage has been lukewarm. When Howard Kurtz asked why this might be on Reliable Sources, here was the answer he resoundingly got: the scandal wasn’t sexy enough.

CBS correspondent Chip Reid, pundit David Frum, and The New Republic‘s Michelle Cottle all chimed in on Kurtz’s panel, with Frum the lone voice asserting that there was a problem with Melodee Hanes’ appointment: he called the scandal “enormous” “because the U.S. attorney there is the chief anti-corruption officer in that district. And what are the odds that that anti-corruption officer would ever investigate anything Max Baucus doesn’t want to investigate?”

Reid and Cottle weren’t so sure that there would ever be a Baucus-gate. Reid: “I don’t think it has legs because there’s no sex scandal, and it’s not like Vitter. It’s not like Ensign. There’s no scandal here.” Cottle: “as far as scandals go, there’s no hookers, there’s no payments, there’s no, you know, this doesn’t rise to the level of juiciness.”

Maybe there’s a simpler, (slightly) less cynical explanation: the news broke on a Friday, and hard news stories tend to get edged out by fluff over the weekends. And hey, did you hear that Tiger Woods had more mistresses, maybe?


Even though Kurtz was the moderator, he brought up another loaded possibility that even the conservative Frum didn’t fully run with: that media outlets were playing favorites with the Democratic Senator Baucus. “I just think that news organizations that have played this down have left themselves open to charges after the John Ensign story and after the Mark Sanford story that they’re a little bit less enthusiastic about Democratic scandals.”