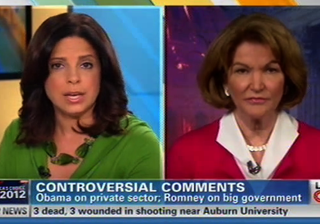 Things got a little loud earlier this morning on Starting Point, where the topic du jour (and of the week, it seems it will be) was President Obama’s “private sector is doing fine” gaffe, compared to comments from Mitt Romney that America does not need more firemen, policemen, or teachers. On with Soledad O’Brien was Romney strategist Bay Buchanan, who argued that President Obama’s economic proposals were “crush[ing] the hopes and dreams of millions of Americans.”

Playing the clip of Romney saying that he does not think the country needs more firefighters or teachers, Buchanan objected to the soundbite, arguing that “what Romney said is Obama doesn’t have a message,” and that he opposed big government. O’Brien challenged her on this point, noting that “he goes on to literally say we need more firemen, more policemen, more teachers,” so much so that Gov. Scott Walker of Wisconsin distanced himself from those comments yesterday.

“What we have is a president who has failed America,” Buchanan replied, “who has crushed the hopes and dreams of millions of Americans,” including, she adds, “people 50 and over who will never see another job.” To her, the President was either “completely clueless on what is going on to this country or he just doesn’t care.”

The two then argued over the amount of responsibility that the President must assume for the economy, which Buchanan argued should be nearly all of it, while O’Brien noted that the latest CBO report blamed Congress for dropping the ball on the budget.

“Clearly this is going to be the argument that continues,” O’Brien ended, “with everyone yelling at each other.”