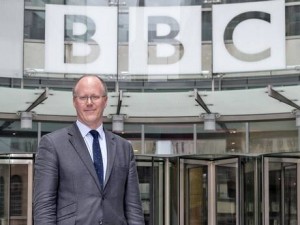 BBC director-general George Entwistle has resigned 54 days into his new post over mistakes made in a Newsnight report on allegations of child abuse at the North Wales care home Bryn Estyn, the BBC is reporting today.

The current affairs program’s report had false/y implicated ex-senior Tory Lord Alistair McAlpine, the former treasurer and deputy chairman under Margaret Thatcher, and Entwistle has publicly stated that, “We should not have put out a film that was so fundamentally wrong.”

BloombergBusinessweek reports that McAlpine has stated, via email, that “Ill- or uninformed commentators have been using blogs and other Internet media outlets to accuse me,” adding that he intends to “publicly tackle these slurs and set the record straight.”

Here is Entwistle’s full statement, via The Guardian:

When appointed to the role, with 23 years’ experience as a producer and leader at the BBC, I was confident the trustees had chosen the best candidate for the post, and the right person to tackle the challenges and opportunities ahead. However, the wholly exceptional events of the past few weeks have led me to conclude that the BBC should appoint a new leader.

To have been the director-general of the BBC even for a short period, and in the most challenging of circumstances, has been a great honour.

While there is understandable public concern over a number of issues well covered in the media – which I’m confident will be addressed by the review process – we must not lose sight of the fact that the BBC is full of people of the greatest talent and the highest integrity. That’s what will continue to make it the finest broadcaster in the world.