BBC Plans To Boost News Coverage In The U.S.: “Never Been A Greater Need For Impartial News” 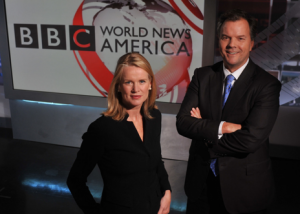 The BBC has announced changes in its American news efforts, including changes for the network’s flagship U.S. newscast, BBC World News America, expanded ties to PBS stations, and a promise of new investment in the U.S. version of the BBC website. “The BBC has a well deserved global reputation for the independence and quality of its journalism, as it its recent coverage of Egypt proves. With networks staking out ideological positions on the right and the left, or caught in a state of flux, there has never been a greater need for an impartial news offering for cable,” said Herb Scannell, president of New York-based BBC Worldwide America.

The changes announced today include the migration of the BBC World News America newscast anchored by Matt Frei and Katty Kayfrom BBC AMERICA to the BBC World News channel and to PBS stations across the U.S. “This plan, and our reformatted newscast, allows us to reach more viewers than ever before,” said Rome Hartman, executive producer of BBC World News America. “We already have an existing partnership with PBS and share core journalistic values, so this move makes perfect sense.”

The BBC says its expanded news operations in the U.S. will include the hiring of additional journalists in the Washington, DC bureau and enhanced digital offerings on the BBC website. “Americans look to the BBC to ‘connect the dots’ between America and the world in ways very few news organizations can,” said Miranda Cresswell, senior vice president of BBC.com. “This new investment will allow us to ramp that up and respond to growing demand for online news video content.”