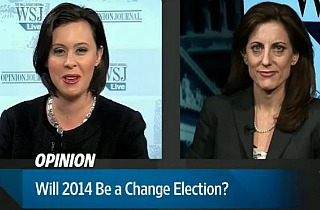 At this stage in the 2014 election cycle, very few poll watchers are predicting a “wave” election favoring one party or the other. Both structural reasons, e.g. highly gerrymandered districts which protect all but the most centrist members of the House of Representatives from vulnerability to a challenger from the opposing party, and the early calendar date have led political prognosticators to reserve judgment about what kind of cycle the next one will be.

However, some are surveying the political landscape and are concluding that the makings of a “change election” are evident. But just what kind of change remains to be seen.

On Tuesday, George Washington University Associate Professor Lara Brown told Wall Street Journal editorial board member Mary Kissel that incumbents are going to be targeted by dissatisfied voters. She added, however, that the GOP House may be shielded from the wrath of the electorate while the Democratic Senate may not be.

Kissel began by asking Brown how the collapse in America’s faith in government, evidenced by a Gallup polling trends which show a pronounced breakdown in the faith American voting blocs place in government, could impact the midterm election.

Brown said that the “number of fiscal standoffs” that have characterized politics in Washington from 2008 to today have made Americans frustrated with the political establishment.

“What we’ve got is an incredibly polarized situation,” Brown continued. “I think what you have is that there is more of a sense that there’s kind of a pox on both your houses.”

“I think, surprising to many sort of commentators and pundits, the Republicans numbers haven’t fallen through the floor and the Democrats are losing popularity and approval,” she added. “So, really this is something of an anti-incumbent frustration, anger, disappointment, and distress.”

“Does that mean Republicans run a risk of basically misreading these polls if they think that this is frustration with Democratic governance?” Kissel asked.

Brown said that they could. “Because the Republicans have fewer House seats that are actually competitive and vulnerable, and because so many incumbents are reelected in the House, and because the Democrats are, in fact, vulnerable in the Senate, it wouldn’t be unlikely for this anti-incumbent wave to fall unevenly on these branches of government, hurt Democrats more, and for Republicans to misread that as an anti-Democratic wave.”