Beauty And The Beast: A Tale Of Two Positions On Gay Marriage From Christie And Bachmann 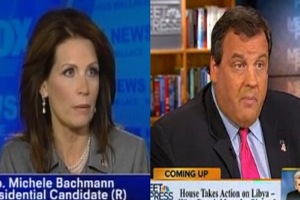 Now before anyone gets too excited, let me quickly establish that “beauty” and “beast” are adjectives I’m using to describe how New Jersey Governor Chris Christie and Republican presidential candidate and Congresswoman Michele Bachmann speak, and not how they look. With that out of the way, contrasting their two Sunday show appearances should demonstrate that as politicians, Christie does indeed speak “beautifully” while Bachmann’s utterances are frighteningly filled with contradictions and migraine-inducing head-scratchers.

The state of New York’s legalization of same sex marriage was the topic for a question posed to both Christie and Bachmann as they appeared on Meet the Press and Fox News Sunday, respectively. The issue is interesting in that it is often the Republican party that is in favor of states’ rights and opposed to one-size fits all, big government legislation (like Obamacare) to solve problems. Therefore, the question moving forward is whether conservative champions of state rights applaud the New York legislative process or whether they deem the definition of marriage to be of such national significance that a federal policy is required to prevent the dangers of conflicting state rules?

Christie unapologetically makes his stance on the issue clear:

“I am not a fan of same sex marriage. It’s not something that I support. I believe marriage should be between one man and one woman. That’s my view and that will be the view of our state, because I wouldn’t sign a bill like the one that was in New York.”

In under one minute Christie simply and eloquently establishes his opposition to the New York bill. If you disagree with his position, and this is the only issue by which you choose your political candidate, then Christie is simply not for you. And he’s fine with that. How truly refreshing to hear a politician just say their opinion, knowing as he does, how truly unpopular it might be in his own liberal state that also happens to neighbor New York.

Let’s compare this response to Bachmann who literally takes four minutes answering the same question, and where at one point her interviewer, Chris Wallace admits “I’m confused by your position on this.” Bachmann at first declares “in New York state, they have passed the law at the state legislative level and, under the 10th amendment, the states have the right to set the laws that they want to set.” When Wallace assumes, like anyone listening would, that Bachmann’s acknowledgment that New York has the right to define marriage through the legislative process would mean she opposes a Constitutional amendment defining marriage (which would expressly prohibit New York from doing what she just said she approved of), Bachmann says no. In fact, she also wants a Constitutional Amendment defining marriage to be between a man and a woman.

The potential argument to help her erase these contradictions and to make her reasoning consistent would be to say “until there is a Constitutional Amendment defining marriage between a man and a woman, I reluctantly support any state’s right to make that determination in the absence of a needed Amendment.” Instead of saying that one sentence, Bachmann spends four minutes tap dancing to avoid saying anything too controversial and discussing how she will not appoint activist judges, attacking Obama for not enforcing the Defense of Marriage Act and throwing out this gem: “family is a fundamental unit of government.”

Bachmann needs to learn from Christie that not only is “brevity the soul of wit” but that simple, direct and honest communication also makes you a much more attractive candidate.

Watch the clips of both of Christie’s and Bachmann’s interview from NBC and Fox, respectively: