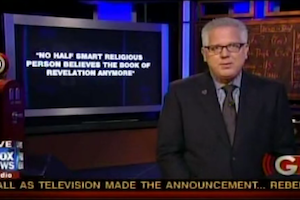 The theme of today’s Glenn Beck was Good and Evil. At the top of the show, after waxing nostalgic on a Star Trek episode about that eternal struggle, Beck explained that those were the battle lines that were being drawn, not Left or Right (although he did make sure to show the clip of Israel’s Prime Minister Benjamin Netanyahu calling out Europe’s “far left”). He brought out two chalkboards and separated them, one as the Good board and one as the Bad one. Then he asked where some of his fellow television personalities like Bill Maher, Joy Behar, Janeane Garofalo, and an unnamed Lawrence O’Donnell belong.

Here’s how he explained the situation:

“America, understand one thing; this is Good versus Evil and your name will be put on a chart or a book someplace. Evil is alive and well on this planet and it is growing. It needs to be put on notice that good is growing as well.”

Beck then tried to warn the growing Good half of some of the comments on television, playing clips of anti-religious quotes of those mentioned above. All except for O’Donnell. With O’Donnell, he just referred to him as “clearly non-God fearing host” and quoted him without naming the attribution.

Last week, O’Donnell picked a fight with Beck, decrying the Fox host’s connections between current events and the Book of Revelations and asking why anyone would want to listen to that “when there’s another guy on MSNBC at 8 every night who can tell you with absolute certainty, beyond a shadow of a doubt, that this is not the end of the world?” O’Donnell was then overjoyed to get a response so, tonight, Beck used the oldest snub in the media game; not naming your enemy. (Purposefully misspelling the person’s name is also effective)

Beck then defended his apocalypse comments, pointing out that they were basically the same (though less eloquent) as those coming from Franklin Graham. And he pointed out just how he thought you could classify anyone who said disagreed:

“Isn’t it crazy to not be prepared? Shouldn’t we, as citizens, as guardians of the Republic – make no mistake, that’s what you are; a Guardian of Man’s Freedom. Shouldn’t we as citizens be prepared? And shouldn’t anybody that’s telling you, ‘Ah, that’s crazy. You shouldn’t prepare for things’…which blackboard do they belong on?”