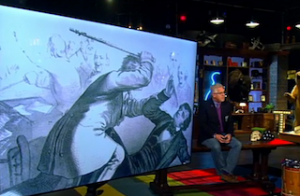 After telling a brief history of the “pro-freedom” Republican Party’s founding culminating with the election of Abraham Lincoln in 1860, Beck zoomed in on the story of Sumner’s speech, in which he made a the grievous error of calling out a fellow senator by name. That senator’s cousin, Preston Brooks, then came to the Senate floor and beat Sumner with his cane.

“The most important difference,” Beck said, “between what happened with Rand Paul’s speech last weekend and Senator Sumner’s speech is, well, Rand Paul wasn’t beaten with a cane.” He added that Paul “didn’t attack anyone.” He just “defended the Constitution.” But that didn’t stop McCain and Graham from calling out Paul by name on the Senate floor. As Beck said, “their words are their cane.”

Beck then entered the prophetic mode he self-deprecatingly mocked last night on The O’Reilly Factor, predicting that just as Sumner’s speech launched a movement that ended with Lincoln in the White House, Paul’s filibuster will presage a similar “historic movement” for the libertarian-leaning wing of the Republican Party.

Watch video below, via The Blaze: