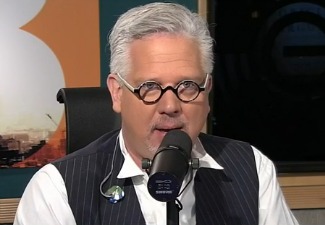 (WARNING: In case you care about this sort of thing, this post contains a bunch of spoilers for Noah.)

Glenn Beck panned the new film Noah last Friday, but over the weekend he saw the movie to see if it was better than the reviews said. Beck came out of that experience bewildered at some of the creative license in the film and how Noah was portrayed as a “homicidal maniac.”

Someone at Paramount reached out to Beck and invited him to watch the movie, but Beck found it hard to contain his shock as the film unfolded, even giggling at parts involving the “rock people” sent by God to help out Noah. Beck credited the movie for not being the climate change propaganda some reviews made it out to be, but aside from that, he said, “If you are looking for a biblical movie, this is definitely not it.”

Beck’s biggest problem with the film was Noah himself, portrayed less like a “nice gentle guy” and more like a “homicidal maniac.”

“More of the man––’I just love people and I love God’––and less of him, you know, trying to break down the doors inside the ark to kill his whole family. That is more of the––Noah. In. The Babylonian Chainsaw Massacre.”

He suggested it would likely only appeal to people who wish the Bible was more “like a comic book.”