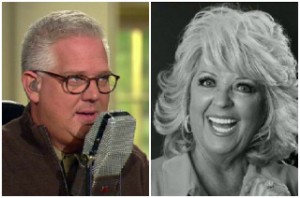 “Who really cares what Paula Deen says?” Glenn Beck asked on his radio show Monday. The host took on the latest controversy surrounding the (former) Food Network star, who admitted to using the “n-word” and making other racially insensitive comments to employees several years ago. Attempting to diminish Paula Deen‘s role in socierty, Beck said, “Unless it involves butter, I wouldn’t check with Paula Deen on anything.”

That being said, Beck did think that the Food Network went too far when it decided to fire Deen last week. “The word police have decided,” he said, “that now she’s no longer fit to be a cheese sandwich maker on television.” Beck could not figure out how Deen saying she hates black people, or white people for that matter, should affect anyone’s life.

Beck said he defense of Deen was no different from his unlikely defense of Bill Maher, who lost his show on ABC after famously saying the 9/11 hijackers were not “cowards.” Beck said he found Maher’s comments “despicable” but he added, “you don’t fire him over that. What part of ‘Politically Incorrect’ did you not understand?”

Whether it’s Paula Deen or Bill Maher, Beck concluded, “you don’t fire people for what they say. You don’t round them up like it’s a witch hunt.” He said the firing were another example of the “McCarthy era” returning in America. “All your doing is silencing people.”