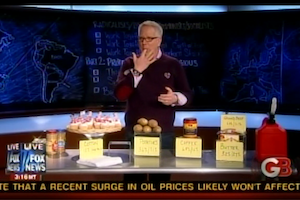 Tonight, Glenn Beck explained that he wanted to talk to the working man, union or otherwise, because we’re not that different. Wearing a sweater instead of a shirt and tie and featuring a much calmer demeanor than he’s had in a while, he used a tray of cupcakes with different flags in them to explain the problems with the economy, specifically, the dangers of inflation. And, you know what? It was the best the show’s been in about a month.

On January 26th’s episode, Beck gave his assessment of Barack Obama’s State of the Union by comparing it to a meal of fish sticks and cookies. At the time, I eagerly wrote that Beck and his prop department were “killing it” with the visual metaphors. A few days later, when Beck started his first big Egypt broadcast by showcasing an an entire army of chalkboards, I remember mentioning to a co-worker that “this is gonna be good.” Hoo, boy, was I wrong. That was the moment when my time on the Glenn Beck beat turned from a fun day-ender to a near torturous slog.

What changed in the show then? Well, at first we thought the problem was that Beck was only complaining instead of offering any solutions. However, when he rectified that, the show didn’t get any better. It then became clear that a show that used to jump back and forth between wacky stuff like the fish sticks and more serious matter had now become stuck on two modes. Every episode was either Beck angrily screaming at anyone who disagreed with him or Beck smugly updating us every time the slightest detail turned out to be true. Sure, there were a couple of diversions like the sudden War on Google, but it was still all dreariness all the time.

Now, I know the problem with what I’m saying.

A few weeks ago, Todd VanDerWerff, a TV critic for the A.V. Club, watched Glenn Beck for a week as part of an ongoing series where television writers watch popular shows that they have never seen in an attempt to gauge what the appeal is. In the resulting column, he said something interesting by saying the show was basically a news show version of Lost. It kind of makes sense. Instead of the typical approach to current events, Beck finds connections in everything and explains how they all come together, building a “mythology” if you will, leading towards an ultimate destination, the “Perfect Storm” that will threaten the nation. Now, since Beck is claiming that that event he has been warning against for years is finally upon us, it would be silly to expect him to not focus on it. It would be as if Lost spent their last season focusing on a ridiculous “sideways universe” that turns out to basically be irrelevant instead of the mysteries of the island. (Yeah, I’m still pissed off, Lost.) However, Beck can focus on the Perfect Storm while still making it good television.

What made the cupcake thing today fun wasn’t because of what he was talking about but how he was doing it. For instance, instead of being angry or smug, he was charming and self-deprecating. And, guess what? He was still explaining something and explaining it well. What made those visual metaphors so much fun is that they were entertaining and Beck was using them well. Sure, the next segment of the show featured one of my least favorite Beck tropes, the “make fun of the evil young people” bit as Beck picked on some dopey protester kid, but I was so glad not to hear that nails-on-chalkboard “baby voice” he does every time he quotes from an article accusing him of being a conspiracy theorist, that I happily sat through it.

I guess what I’m saying is it was nice to have the old Beck back. Whatever the content of the show in the future ends up being, I hope this is the guy who’s presenting it.

Check out the cupcake clip from Fox News below: