Beck Fires Back At Maddow, Questions Her ‘Intellectual Integrity’: ‘I’ve Never Been Called A Conspiracy Theorist’ 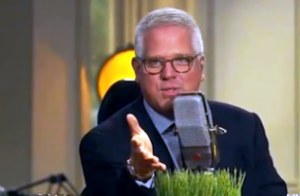 MSNBC host Rachel Maddow has taken to tearing apart conspiracy theorists like Alex Jones and the ever-outraged right-wing response to recent events. On the flip side, Glenn Beck responded to her criticism, calling into question Maddow’s “intellectual integrity” and rejecting the comparison to Jones, with whom he said he disagreed.

The segment played an audio montage of some of Maddow’s past remarks in which she invoked Beck and Jones and cited theories about the moon landing, 9/11, the Boston Marathon bombing, and the Sandy Hook Elementary School shooting. The “Glenn Beck-Alex Jones view of the world.”

“I don’t believe any of those things,” Beck said plainly — as the next montage played: Maddow’s remarks interspersed with Beck’s remarks, intended to refute Maddow’s contention that Beck, too, believes those theories.

“We have debunked all of those things,” he explained. “I’ve never been called a conspiracy theorist in my life. I’ve had death threats because I’ve debunked the [9/11 theories].”

Beck continued to press on about how he spent an entire show debunking the Newtown theories — and received death threats for that “from the Alex Jones people.”

“To put us into this group is so ridiculous,” he asserted, as the chyron read “Maddow’s intellectual integrity questioned.”

“In her effort to come up with one thing that you’re a conspiracy theorist on, she came up with none!” Steve Burguiere argued. “All of the example were all things that you didn’t believe and have been on the air saying you don’t believe for for years. What does that say about their case? And what does that say about your case when say that media is painting you a certain way? She can’t come up with one damn thing!”

Watch below, via The Blaze: