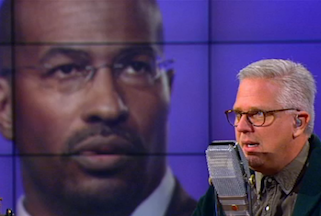 Apparently Glenn Beck enjoyed Thursday’s Van Jones vs. Ted Cruz Crossfire showdown as much as the rest of the cable news-watching universe. On his radio show Friday, Beck meticulously dissected the confrontation, deeming Senator Cruz the undisputed winner and paining Jones as “one of the most dangerous men in America.”

After a detour involving how big of a “coward” President Obama is and how he “cries himself to sleep” at night, Beck got back to the subject at hand. “Van Jones is a Communist revolutionary,” he resumed. “And the guy spends time studying. He didn’t study Ted Cruz enough. And I will guarantee you that it won’t go this well next time because Van Jones studies people and then he knows exactly how they are going to move. He’s a brilliant man, extraordinarily dangerous.”

At the same time, Beck said he’s not a big fan of Cruz’s “style,” mostly because he’s from Texas and reminds him of George W. Bush. But if you can get past that, he said, you realize that he’s a “brilliant, brilliant man.”

“He will eviscerate you. He will just eviscerate you,” Beck said of Cruz. “And to see somebody give Van Jones a slap down is quite satisfying. If you ever think that CNN is a rational, normal, not a leftist organization, look who they hired. They put a Communist revolutionary on, and they just treat him like he’s just normal guy. He’s center. No, he’s not.”

While CNN is unlikely to start putting “Communist revolutionary” under Jones’ name every time it appears on screen, as Beck suggests, they certainly do not portray him as being from the “center.” In fact, at the start of every episode of Crossfire (that Jones is on), the announcer says these words: “On the left, Van Jones.”