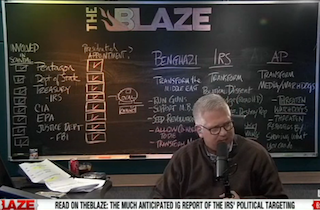 Amid the scandal and trouble facing the White House, Glenn Beck found a way to tie it all together, attributing it all to the grand vision of “fundamental transformation.” Citing “arrogance,” Beck laid out exactly what Benghazi, the IRS scandal, and the AP/Justice Department issue all have in common.

“In the end what do these three scandals have in common?” Beck asked, going on to offer the answer. “What they have in common is the arrogance of transforming the world.”

On the chalkboard in front of him, Beck mapped out the three issues, noting various attributes of each one as well as which agencies were linked to them — and whether there were presidential nominations involved.

And don’t forget: There’s also the transformation of the military and State Department. A few “coworkers” dying was essentially collateral damage, Beck charged.

Eventually he digressed to the IRS scandal, which was about transforming political dissent. Obviously, Beck noted, Obama can’t just explicitly discourage dissent — so he’s having the IRS do the dirty work for him. Beck summed up what he perceived to be Obama’s message thusly: “I’m actually going to use the union thugs to beat you, and I’m also going to destroy your life and finance through the IRS. I will destroy you. I will bankrupt you.”

There’s also the AP/DOJ problem. The “final piece of transformation of the media.” Drawing allusions to communists in Vietnam, the Civil War, and World War II, Beck observed that the administration’s fairly successfully attempted to transform the media for some time now. And this latest story is just the concluding installment.