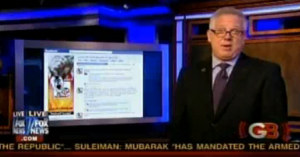 Glenn Beck is certainly not thrilled with the successful revolution in Egypt. While on MSNBC, Chris Matthews and the field reporters in Egypt were giddily wondering whether other Middle Eastern regimes might fall, doom and gloom Beck was praying that it wouldn’t happen. All of this fear also turned the episode into another one of Beck’s classic “Young People Just Don’t Get It” shows as he tackled Google exec and Egyptian protest organizer Wael Ghonim as well as the terrors of social media.

This began when Beck read off Ghonim’s quote that we should “ask Facebook” to see where the cries of protest would be heard next. Soon the Fox News host was flipping through scary Facebook pages promoting “days of rage” throughout the Middle East. Then he let loose with this:

“The most important aspect to understand is this is not spontaneous and it will cascade throughout the Middle East. I hope to God that it does not but I bet it touches Europe and then the world. It will not have a singular ideology but it will mean revolution, destruction, and change and it will be led by young people. Because anyone over 30 knows that chaos never leads to anything good.”

Don’t trust anyone under 30? It’s official. Glenn Beck is the anti-rock star.