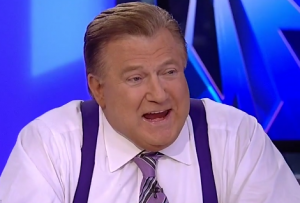 Donald Trump‘s political ambitions have been the source of much debate and eye-rolling, as well as the now-infamous BuzzFeed profile, and in reaction to Trump speaking at CPAC Thursday, The Five‘s Bob Beckel absolutely trashed Trump, asking “What is this guy doing at a political convention?!” He said Trump’s appearance was not about politics, it was all about boosting his own profile, crying, “You don’t know politics, man. Get out! You’re not gonna run, you know you’re not gonna run, you want the attention to be up there. Why are you there?!”

Beckel added, “I know more about politics in this little finger than that’ll guy know in his whole life.”

When Kimberly Guilfoyle stood up for Trump and argued he has “a message that resonates,” Beckel asked, “What is it about all you people who live in New York City that you kiss this guy’s butt all the time?”

But when Jesse Watters said Trump connects with people because he’s a “blue-collar guy,” Beckel practically exploded with shock and disbelief, almost laughing at the very idea that anyone would ever want Trump running for president. He concluded, “He’s a nice guy, but he’s a joke when it comes to politics!”