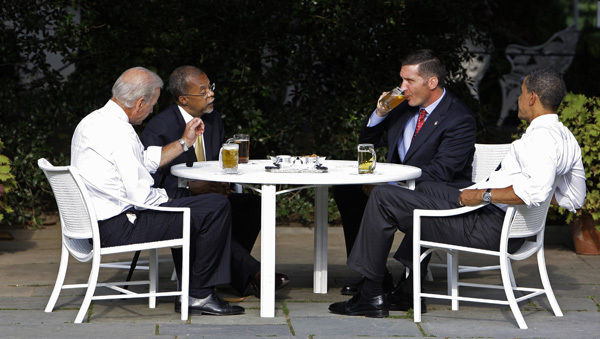 In our short three-episode run of Office Hours,the task of finding news-cycle appropriate lead-out music has fallen to me. Last week, in honor of Walter Cronkite, it was “That’s The Way It Is,” by Celine Dion; this week,  in honor of the Beer Summit, I selected “Gin & Juice,” orignally by Snoop Dogg but performed by The Gourds, because I find that version more pleasant. I listened to it beforehand and suddenly realized that “D-O-Double-G” could easily be replaced by “Barack O-B.” From there on, I couldn’t help myself. Oh come on, it’s not such a huge leap from “The Audacity of Hops,” is it? Sing along (and try to ignore the slightly profane original lyrics) here.

With so much drama down in DC
It’s kinda hard being President Barack OB
But he, somehow, some way
Keeps comin’ up with new ways to keep the media at bay
Today he’s kickin’ a lil’ something to the WHPC
And, makin’ new friends as they breeze, through
Don’t you know it’s 6 in the evenin’ and the Beer Summit’s jumpin’
‘Cause Michelle ain’t home
He’s got Skip Gates in the living room tyin’ one on
And the press ain’t leaving til the photo op’s done
It’ll just take a few –
Makin’ nice with the Professor and the Boy in Blue
So turn on the cameras and open the door
‘Cause (’cause what?) he loves them press corps, yeah!
So let’s all raise a glass to that –
Beers up, pens down, post-racial is now where we’re at…
Rollin’ with the prez fixin’ Gates-Gate, sippin’ Red Stripe and Bud (and Blue Moon)
With no minds on their health care and no healthcare on their minds…