Behind The Hero: Kai The Hatchet-Wielding Hitchhiker Gives Intimate Interview About ‘Dark’ Past
video

Behind The Hero: Kai The Hatchet-Wielding Hitchhiker Gives Intimate Interview About ‘Dark’ Past 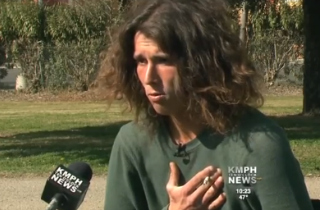 After our own Meenal Vamburkar posted the video of a local news report on Kai the hatchet-wielding homeless hitchhiker, the unlikely hero became a national sensation. He’s been praised by everyone under the sun from Fox News to Stephen Colbert; and he’s even been given the requisite auto-tune treatment. But do we actually know Kai the hatchet-wielding homeless hitchhiker?

No, says Fox affilate reporter Jessob Reisbeck. And so Kai sat down with that very reporter who made him famous and revealed the dark, intimate secrets that made him the free spirit he is today.

“Aummm,” Kai began, explaining his inspiration for life. “That vibration, bruh. It’s being a part of everything.”

Despite originally claiming to be from Sophia, West Virginia, Kai revealed to Reisbeck that his name is really Caleb Lawrence, and he was born in 1988 in Western Canada.

The 24-year-old recalls his upbringing: “I was pretty much raised by the TV, I was a latchkey kid. And I was hanging around in the ghettos and places where I grew up when I was only, like, 7 or 8. Wandering around with no support, nobody around to help me out and there’s a lot of bad stuff that happened to me.”

Revealing an enormous back tattoo and suggesting he has some severe scarring, Kai alluded to a childhood of abuse and molestation. Reisbeck said many of Kai’s “darker, gut-wrenching” stories cannot be repeated on television.

The famed surfer dude explained that, at some point, he “wanted to get out of there, to run away.” Pressure to stick around with what sounds like a broken home made Kai feel “trapped.”

Despite his simple demeanor, Kai claims to have a high school diploma and can speak three languages. He showed off his French skills to Reisbeck, and seemingly explained that his “far-out” beliefs help him cope with a dark past.

Hinting at a distant, perhaps abusive father that he does not want to emulate, Kai said: “I go out camping all the time. I’m good to people. I don’t judge myself for what I do. I ask myself the reasons behind it.”

And so will Kai’s newfound Internet fame change his personality? Don’t count on it. “I’m going just to be Kai any way it goes. Obviously I was put in this situation for a reason. I do hope people don’t become obsessed about this because there’s so much more that we can do.”

Watch below, via KMPH: