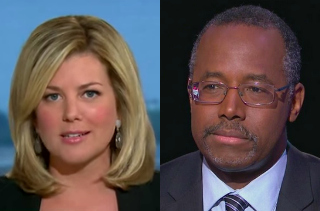 In an interview on Fox News Wednesday night, Ben Carson said he doesn’t equate gay rights with civil rights because he’s never seen a “straight only” water fountain. So, when he joined CNN’s Brianna Keilar by phone Thursday afternoon, she had a very simple question for the Republican presidential candidate: “Do you think that gay Americans are discriminated against, that they face discrimination?”

Over the next two minutes, Keilar asked him some variation of that question at least six more times. At first Carson said he didn’t want to talk about the “gay issue” except to repeat the question he posed to Fox News’ Bret Baier: “What position can a person take who has no animosity toward gay people, but believes in the traditional definition of marriage that would be acceptable?”

Keilar decided not to take a stab at that one but instead told Carson she felt it was “fair” to ask him her original question because as a candidate for president part of his job was to explain his positions. When she repeated her question, he would only say that the Constitution “protects every single American” and “everybody has equal rights, nobody has extra rights.”

After she asked him two more times, Carson admitted that “every group faces some type of discrimination,” including Christians. “I wish we would talk more about that.”

When Carson insisted he had answered her question, Keilar stated, for the record, “I think you gave me part of an answer, but not a complete one.”