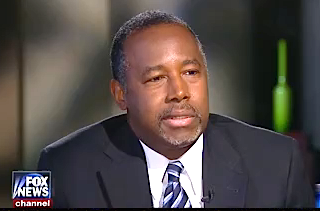 During his extended sit-down with Ben Carson Wednesday evening, Fox News’ Bret Baier gave the 2016 Republican presidential candidate an opportunity to explain, once again, the confounding comments he made on CNN’s New Day back in March about people who supposedly “go into prison go into prison straight — and when they come out, they’re gay.” That was the evidence he used to conclude that being gay is “absolutely” a choice.

“They saw that as the opportunity to finally knock this guy out,” Carson said of his critics. “And they thought they had done it. ‘Stick a fork in him. He’s gone.’ They were jubilant. And now they’re saying, ‘I can’t believe this guy is still here. Are you kidding me?'”

On “the whole homosexuality thing” Carson had a question for the LGBT community: “What position can a person take who has absolutely no animosity toward gay people, but believes in traditional marriage that would be satisfactory to them?”

Carson admitted that his prison comments were “bone-headed” but added that he only made them because he was “a little bit irritated” that host Chris Cuomo appeared to be “equating” gay rights with civil rights. “Because quite frankly, I didn’t remember any times when there were signs up that says, you know, ‘everybody else here and gay people have to drink at this fountain.'”

While water fountains have not been a major battleground of the gay rights movement, there are plenty of analogous situations to what African-Americans faced in the 1960s. For instance, gay people are still not allowed to donate blood for fear of spreading HIV.

And it was less than a month after Carson’s original CNN appearance that a pizzeria in Indiana said it would refuse to provide pizza for a same-sex wedding on religious grounds, setting off a national debate. And then, of course, there is the current Supreme Court case on marriage equality that mirrors the interracial marriage debate settled in 1967.

Following that exchange with Cuomo, Carson went on Sean Hannity’s show and essentially blamed the media for asking him about gay rights in the first place. “I simply have decided I’m not really going to talk about that issue anymore because every time I’m gaining momentum the liberal press says, ‘Let’s talk about gay rights,'” he said at the time. “And I’m just not going to fall for that anymore.”

Besides the fact that he has repeatedly failed to keep that specific promise, does this mean that Fox’s Bret Baier is part of the “liberal press?”