Ben Carson on Donald Trump as a Running Mate: Anything Is Possible
video

Ben Carson on Donald Trump as a Running Mate: Anything Is Possible 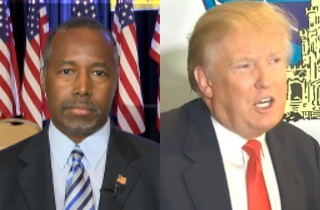 Whenever he is not defending his explosive comments on illegal immigrants, Donald Trump‘s presidential campaign has been determined to express how his wealth and successful business career distinguish him from his competitors, who he has described as professional politicians.

Dr. Ben Carson has also had his share of controversial comments, but has sided with Trump on certain issues in the past, while also making the case about how being a political outsider allows him to speak and approach issues differently. Fox’s Neil Cavuto had Carson for an interview on Friday, where he asked Carson that, should he receive the Republican nomination, would he ever consider combining forces for the ultimate GOP combination of Carson/Trump 2016.

“I have had a chance to associate with [Trump] now that I have moved down to Florida,” Carson said. “He’s a very smart guy, and he is a fun guy. So, I will leave it at that.”

Cavuto pressed on, asking Carson, “so you might,” to which Carson’s final word was: “All things are possible. Absolutely.”

Earlier in the interview, Carson said Trump should not back down from his controversial statements, instead reiterating his position that political discussion is stifled by PC culture.

“There’s no question that we are in the process in this country of giving away all of our values and principles for the sake of political correctness,” Carson said. When asked about whether Trump’s media attention was a distraction to the other candidates, he said, “we need to discuss these things openly. I like people who are willing to say what they believe.”

You can watch the segment here, via Fox News:

[h/t The Hill]
[Images via Screengrab]