Ben Carson to CPAC: Conservatives Do Care About the Poor 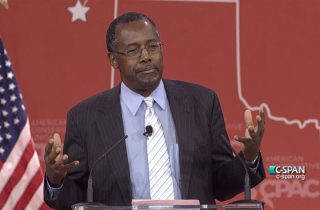 Dr. Ben Carson kicked off the 2015 Conservative Political Action Conference with a speech that will likely continue to fuel rumors that he will run for president in 2016. Hitting all the standard conservative bugaboos — political correctness, Common Core education standards, Obamacare, terrorism, and expansive welfare programs.

The conservative media star and retired neurosurgeon began his speech by lamenting double standards regarding race. “If you’re white and you oppose a progressive black person, you’re a racist,” he said, “but if you’re black and you oppose the progressive agenda, then you’re crazy.”

He also tackled the conservative movement’s perceived lack of compassion for impoverished Americans. Noting the Democratic Party’s history of solutions including Great Society poverty programs, Carson said it’s largely been a failure and that “Intelligent people would look at that and say, ‘We need to change course.'”

“We need to understand what true compassion is,” he told CPAC attendees, “in order to reach out to individuals who may think being dependent is reasonable as long as they feel safe…. It’s really not compassionate to pat someone on the head and say, ‘There, there, I’m going to take care of all your problems.’ That is making people dependent.”

On health care policy, Carson joked that he gets asked “Why don’t you want poor people to have health care?” but clarified that he does, indeed, “want everybody to have good health care,” just not via the means currently instituted. He did warn the current Republican Party that “they need to grasp a health care alternative before they try to remove Obamacare,” before explaining health savings accounts (HSAs) as his preferred replacement system.

Towards the end of his speech, Carson rattled off several threats to America: Financial debt, “radical Islamic terrorism,” and not listening to the Israeli government’s warnings about Iran. (His comment that we should listen more to Israeli Prime Minister Benjamin Netanyahu was received with the loudest hoot and hollers of the entire speech.)

Despite a warm reception, Carson declined to indicate whether he will run for president, but did hint at the possibility during a brief Q&A with the audience.

Watch his full remarks below, via CSPAN: