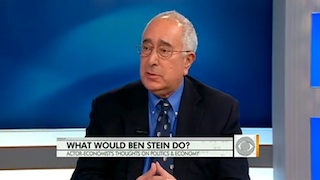 Ben Stein, he of multi hyphenates and mono tones, appeared on The Early Show this morning to talk all of the big stories of the day. He spent a lot of time discussing Herman Cain’s many problems right now and ended up defending the candidate. Perhaps coming from experience as someone who worked with a president who may not have been a great guy personally (Stein was a speechwriter for Richard Nixon), Stein stressed the importance of looking at a candidate’s policies rather than gossip. “If you concentrate on economic policy that will give a man or a woman a job, that means something,” he argued. “To concentrate on a person’s gossipy love life, that doesn’t mean a darn thing.”

RELATED: Counter-Point: Can We Stop Focusing On Whether Or Not Herman Cain’s Seen His Wife?

Alright! So that means Cain has a sweet new endorsement, right? Eh, maybe not. Stein then explained that, when you actually look at policy, he isn’t much a fan of Cain, deriding the candidate’s 999 plan. Instead, Stein argued that his beliefs were much closer to President Obama’s, claiming a need to raise taxes on the rich.

“I live in Beverly Hills part of the year. Practically every person has at least one Bentley. That those people can’t pay a few thousand more in taxes is hard to believe. Many of them have two or three Bentleys! If they can’t afford to pay a little more in taxes, something is wrong.”

This was all very interesting but was completely overshadowed by a moment at the end of the interview when Stein revealed that his 24-year-old son had built special steel grating on his house to keep out zombies.

Wait, what? What the hell does Ben Stein’s son know that I don’t?