Ben Stein To O’Reilly: Atheists Are Fighting A War On Christmas™ Because They Are ‘Angry’ And ‘Bitter’ 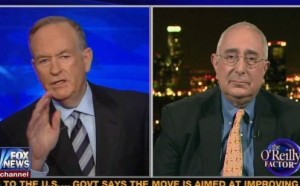 Bill O’Reilly continued his fight against the War on Christmas™ tonight, bringing on columnist and noted monotonous speaker Ben Stein to go after all the secular-progressives and Hollywood types who they believe are, one guesses, on the front lines of the war against the Christmas holiday. In particular, O’Reilly brought up the common complaint that people should be saying “Merry Christmas” as opposed to “Happy Holidays.”

Stein prefaced his comments by acknowledging that even though he is Jewish, he has no problem with people wishing them a Merry Christmas. O’Reilly said that even though it’s a Christian holiday, non-Christians can still celebrate it as well in the spirit of the season. Stein added that the sentiment of the holiday spreads across all faiths and philosophies.

O’Reilly then lit into “secular-progressives” trying to remove not just the Christmas holiday, but all displays and all public utterances of the word. Stein said that there are plenty of “angry, bitter people” looking for a war to wage, and they have settled upon Christmas as their target, which is the only explanation Stein could think of to rationalize people going after “the prince of peace.”

O’Reilly brought up his interview last night with Rhode Island governor Lincoln Chafee, and couldn’t figure out why, when Chafee’s state is suffering economically, he wouldn’t want to encourage people to celebrate Christmas in Rhode Island. Stein touted the values of love and tolerance promoted by the Christmas holiday as more of a reason for anyone to want to set up a Christmas tree in public.