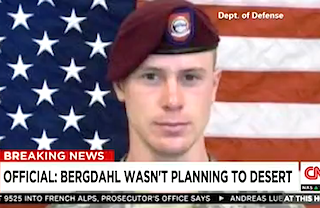 Two days after Sgt. Bowe Bergdahl was charged with desertion for walking off his U.S. military base in Afghanistan in 2009, CNN has reported a potential bombshell in the case. According to unnamed military sources, an Army report is expected to reveal that Bergdahl intended to “walk to the nearest U.S. military outpost to report wrongdoing, believing he could not trust his own commanders to deal with his concerns.”

The new information gives a window into Bergdahl’s potential defense for the desertion offense, which carries a maximum penalty of life in prison. CNN’s sources say the report, which was presented to General Mark Milley, indicated Bergdahl had “concerns about leadership issues at his base.”

“I can’t tell you if his concerns were valid, but in his mind they were,” the unnamed official told CNN.

Before Bergdahl could reach another U.S. outpost, he was captured by the Taliban and held for five years before ultimately getting released last spring in a trade for five Taliban detainees being held at Guantanamo Bay.

“He was going to walk to the nearest outpost to report what he believed was wrongdoing, poor leadership, order and discipline problems at his base, that he didn’t feel he could stay and report it at his base, perhaps not trusting the leadership there,” CNN’s Barbara Starr reported on air late Friday morning.