Bergdahl’s Parents in Teary Conference: ‘Proud of How Far You Went to Help Afghan People’
VIDEO

Bergdahl’s Parents in Teary Conference: ‘Proud of How Far You Went to Help Afghan People’ 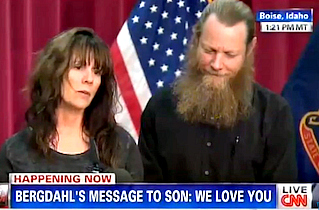 The parents of Army Sgt. Bowe Bergdahl, who was released by the Taliban this weekend after five years in captivity, addressed the media on Sunday, expressing love for their son, joy at his release, and solidarity with other families with relatives still in captivity around the world.

Speaking from their hometown of Hailey, Idaho, Bob and Jani Bergdahl, who have not talked to their son directly, thanked everybody from U.S. agencies to their Twitter community to the “biker dudes and dudettes” who made sure they never felt alone. The family emphasized that Bowe needed time following the ordeal, comparing him to a scuba diver surfacing too quickly. “Bowe has been gone so long, it’s going to be very difficult to come back,” Bergdahl’s father said. “If he comes up too fast, it could kill him.”

Bob Bergdahl teared up when expressing his pride over his son’s service. “I’m so proud of your character,” he said. “I’m so proud of your patience and perseverance, your cultural abilities to adapt, your language skills, your desire and your action to serve this country in a very difficult, long war. But most of all…I’m so proud of how far you were willing to go to help the Afghan people, and I think you have succeeded.”

Lawmakers roundly celebrated Bergdahl’s release, but critics have expressed concern over everything from the five Gunatanamo Bay detainees released in return to the Obama administration’s decision not to consult with Congress ahead of a prisoner swap.