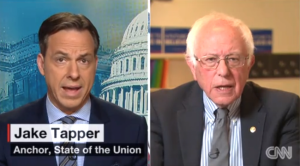 As the fallout continues over the recent commotion in Nevada, Bernie Sanders has virtually confirmed that his relationship with the leadership of the Democratic National Committee is about to get even more tumultuous.

CNN previewed an upcoming State of the Union interview Saturday in which the Vermont senator told Jake Tapper that he will back Tim Canova‘s challenge to Debbie Wasserman Schultz in the primary for Florida’s 23rd district. On top of that, Sanders said that he would also effectively remove Wasserman Schultz as DNC chairwoman if he manages to become president.

“I favor her opponent,” Sanders said. “His views are much closer to mine than is Wasserman Schultz’s. Let me also say this, in all due respect to the current chairperson, if elected president, she would not be reappointed to be chair of the DNC.”

Sanders’ comments come as tension continues to boil between his campaign and the Democratic leadership. Wasserman Schultz has been asking Sanders to apologize for and denounce the alleged mayhem at the Nevada convention, while Sanders’ camp has fired back that the nastiness was blown out of proportion and that the process is rigged to give Hillary Clinton the advantage over outside figures like himself.

Later in the day, Tapper tweeted out a statement he received from Wasserman Schultz in response to Sanders:

Response of @DWStweets campaign to @BernieSanders telling @CNNSotu he will support her primary opponent pic.twitter.com/O1pvRAXH62