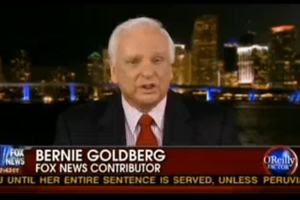 While former President George W. Bush ‘s first major interview in years aired on NBC tonight, Bill O’Reilly did some pre-interview sparring with Bernie Goldberg on the media’s treatment of the current president and even asked Goldberg for sample questions. Goldberg complied with three questions and a suggestion: “play nice.”

Being the author of a book on the relationship between President Obama and the media entitled “A Slobbering Love Affair,” it’s not difficult to imagine Goldberg’s take on how the media covered these elections. He was, however, less combative than usual towards the media on the specific issue of the Democrats, though he did chide them for not standing up to the government when they spend “like Imelda Marcos in a show store.” Instead, Goldberg’s discontent tonight was more with the way the media covers the Tea Party movement and “the American people” in general: “they don’t respect the so-called ‘hicks’ who live in flyover country,” he told O’Reilly. For this he offered a novel solution: “affirmative action for conservative journalists.”

Then came the time for O’Reilly to ask for advice on the President Bush interview. “I’m getting him after he gets worked over a little bit,” O’Reilly joked, waiting for some advice from Goldberg. After telling him to “play nice,” Goldberg suggest three questions: one on faith, one on unintended consequences, and one on his own book, Bias, which the President was photographed holding under his arm in transit recently.

The discussion from tonight’s Factor via Fox News below: