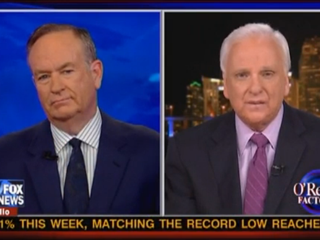 Bernie Goldberg and Bill O’Reilly are longtime critics of the New York Times for much of their coverage of politics, and for what they perceive to be an unacceptable left-wing slant. On tonight’s Factor, Goldberg noted that a number of conservative attacks on President Obama have been deemed “racist” by the left– when, in his perception, the left gets no such scrutiny when they attack black Republicans.

Goldberg began to list off critiques of President Obama that the New York Times had found racial undertones in– Newt Gingrich calling President Obama a “food stamp President,” Rep. Joe Wilson shouting “you lie!” at the State of the Union address, Mitt Romney claiming the President sought to create “an entitlement society.” “Any Republican who criticized Barack Obama… there’s a good chance that at some point members of the so-called Mainstream Media will label that Republican racist.” Goldberg did not expect it to work too well, however, telling O’Reilly that “you can’t cry wolf over and over again.”

O’Reilly agreed, noting that the New York Times was having an “awful time” financially, and part of that was that “if you are conservative, you’re a bad person, they can’t possibly respect you.” Part of the alarm O’Reilly also attributed to polling that made minority voters more important. “If you make the race for President about race, then you’re going to get the attention of minority voters, who Democrats desperately need to turn out in the numbers they did in 2008,” O’Reilly contended.

Goldberg dismissed the tactic as “name-calling” and decried the “incredible double-standard”: “they can call people who criticize Barack Obama racist… but liberals can attack a conservative black person,” he argued. “They mock them… but they say that’s not about race.”