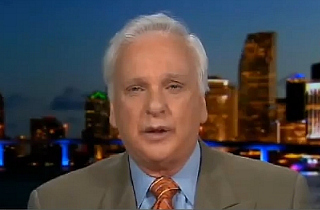 In a recent column, former CBS News correspondent and frequent O’Reilly Factor guest Bernie Goldberg lashed out at the “ayatollahs on the right” who’ve given him grief over his criticism of the “suicide mission” to defund Obamacare, perpetrated by the likes of Fox’s Eric Bolling and Sen. Ted Cruz (R-TX).

In an “Open Letter to the Ayatollahs,” Goldberg likened his conservative critics to Iran’s infamously authoritarian religious leaders:

No, not the ayatollahs in Tehran. This is a letter to you, the conservative American ayatollahs who demand purity, just like the ones over there. I’m not talking about all of you, of course. But this open letter is for many of you; maybe even most of you – the ones who say you agree with what I write on this Web site and what I say on the O’Reilly Factor almost all of the time, but as soon as I fall out of lock step with you … you vow to never listen or read another word I say or write. You are the ayatollahs this letter is aimed at.

Goldberg rattled off several pieces of hate mail he received since criticizing the motivations of Cruz, Bolling, et al, explaining what he’s learned along the way about conservatism and dissent:

So this feel-good nonsense that you spout – that you admire people who stand on principle – is just something you say to make yourself feel good — about yourself. But you don’t mean it. Like the other ayatollahs, reasoned dissent scares you. You talk tough. But you’re weak.

[…] But despite what you say, you don’t really respect independence. You only want to hear from people who agree with you. You rightly deride liberal colleges for not welcoming diverse opinions. You rightly wonder what they’re afraid of. You, my conservative ayatollahs … are them.

Goldberg also waxed nostalgic for the days when conservatives openly appreciated him for standing up against the perceived liberal biases at major broadcast networks. While those days aren’t completely behind him, he wrote, he wishes his conservative critics would not act as fairweather friends when it comes to his “straight shooter” reputation:

When I wrote about liberal bias while I was still a CBS News correspondent, conservatives applauded me. But some of my liberal CBS News colleagues called me a “traitor” because I didn’t toe the party line. They were afraid of dissent. Dissent would force them to consider another point of view, and that’s the last thing they wanted to do. Now I’m called a traitor again – this time by you conservative ayatollahs, for expressing a few opinions you don’t want to hear. Once again, you are what you condemn in liberals.

There is little difference between the authoritarians on the hard left and those of you ayatollahs on the hard right. You’re both closed-minded. You both demand ideological purity.

The ayatollahs in Tehran survive because they will not tolerate dissent. This is all the proof you need regarding their insecurity. You, my American ayatollah friends, are no different. You don’t simply dislike opinions that don’t mesh with yours. You don’t ever want to be exposed to them. At some level you see opinions you don’t share as viruses that may do you in. That’s why, like the ayatollahs over there, you too want to shut down dissent. You too are insecure.

“For the right wing authoritarians who have threatened to never read another word I write, or listen to another word I say,” he added, “do what you have to do.”

“The good people in Tehran will not miss their ayatollahs when they finally go,” he concluded, “And we won’t miss you, either.”