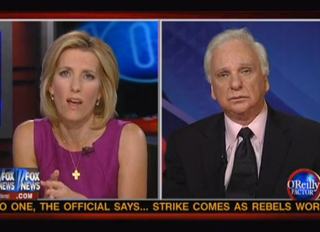 Washington Examiner columnist got a fair deal of pushback for asking Rep. Michele Bachmann whether, as President, she would be submissive to her husband, as per an answer to questions she had given in the past. And Fox News media analyst Bernie Goldberg would typically be one to partake in challenging the media for inappropriate questioning, but this time, he was on York’s side, calling Rep. Bachmann a “hack” for “weaseling out” of the question and claiming “submission” was synonymous with “respect.”

Goldberg was discussing the matter with Laura Ingraham on tonight’s O’Reilly Factor, and made very clear that he didn’t really care about the dynamics of the Bachmann marriage– “I don’t care about any of that.” But what bothered Goldberg was that it was Rep. Bachmann herself that put the topic in play, and then she gave an answer he found inadequate. “‘Submissive’ doesn’t mean ‘respectful,'” Goldberg argued, “those two words aren’t synonymous at all!” The message she was sending, Goldberg argued, was that “you can say things to a friendly audience and get away with it, even in a Republican primary.” That message, he concluded, made her a “hack politician.”

Ingraham disagreed, suggesting the question “makes the questioners look bad,” but Goldberg replied that was only true in the context of a sympathetic audience. “What bothers me about her,” he continued, “is that she says things when she thinks she can get away with that.” He admitted to Ingraham that this didn’t make Rep. Bachmann unique, but still got under his skin.” “Byron York was booed when he asked that question about submission…” he explained, “because it was an uncomfortable question.” But to Goldberg, the only thing that made it uncomfortable was the context Rep. Bachmann created for herself.