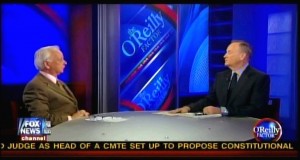 Bill O’Reilly finding something Bill Maher said distaste is not an awful surprise, but to deign it “unexpected” is certainly a new flavor of disapproval. Calling it “the lowest point of the far left” in recent memory, O’Reilly blasted Maher (and his guests on last week’s Real Time) for suggesting his interview with President Obama was racist, and regular Bernie Goldberg agreed: it was, he argued, “almost clinical insanity.”

“I never expected the interview to be labeled racist,” O’Reilly told his audience as he played a clip of the Real Time panel suggesting that the way O’Reilly asked the President if he knew about football had racial undertones. Goldberg agreed, arguing that “you’d have to be out of your mind to find racism in that interview” and, furthermore, that Maher’s argument that O’Reilly was disrespectful held no water given some of his previous remarks. “If you’re going to accuse someone of being disrespectful, you’d better come to the table with clean hands,” Goldberg argued, noting some of Maher’s insults against George W. Bush, including but not limited to “retarded child emperor.”

O’Reilly didn’t seem too concerned about Maher himself, though, or his audience. More specifically, he wanted to know what “the American audience’s reaction” was to such rhetoric, and whether that sort of dialogue was permissible in the eyes of many. “We live in a different America where we could say almost anything and get away with it,” Goldberg noted, though praised HBO for not censoring Maher. “HBO,” he explained (Goldberg is employed by HBO on the show Real Sports), had “never once tried to censor anything I’ve said, to their credit, and they’re certainly not going to try to censor Bill Maher.”

In addition to Maher, O’Reilly let out a bit of steam he had left from the segment before Goldberg on David Gregory asking Speaker of the House John Boehner about the birther movement. Goldberg understood the question to be an attempt at getting Boehner to say “these people are nuts,” but didn’t think the question was “crazy unfair.”