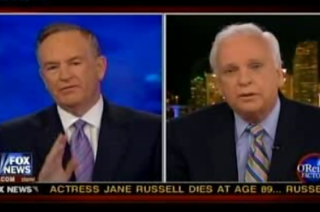 Waters, who has cut his teeth on man-on-the-street pieces during protests and ambush interviews, went downstairs at FNCHQ over the weekend to greet protesters organizing in solidarity with the Wisconsin union movement. He asked one member of the crowd to back up his claim that “Fox lies,” to which the man responded that there were “too many examples,” including many about the Iraq War, but failed to name one. CNN’s Reliable Sources called the coverage “non-fiction entertainment” as opposed to journalism, and O’Reilly took offense. Goldberg, however, took CNN’s side for a change.

“It isn’t journalism,” he insisted. “Jesse Waters didn’t go out there as an objective journalist– he went out there to defend the company that cuts his paychecks.” He went on to contend that, had there been a protester in the crowd with an “intelligent” answer to his question, he wouldn’t have aired it. “He’s going to come back with certain kinds of information because he knows what the boss likes,” he told O’Reilly, who, to at least a certain extent, would happen to be Waters’ boss.

Needless to say, O’Reilly wasn’t having any of this and went to bat for Waters. “The role of a journalist is to get information,” he insisted, adding that Waters did exactly that. What’s more, the protesters arrived at the News Corp. building not of their own accord, he argued, but because they “got an email blast from MoveOn[.org].” To that Goldberg retorted that he would have rather seen a “news story” than the on-the-ground coverage, but O’Reilly insisted that Waters “did his job.”