Bernie Goldberg Fumes To Bill O’Reilly Over ‘Bigotry On The Right’: ‘I’m Sick Of This’
video

Bernie Goldberg Fumes To Bill O’Reilly Over ‘Bigotry On The Right’: ‘I’m Sick Of This’

Bernie Goldberg Fumes To O'Reilly Over 'Bigotry On The Right': 'I'm Sick Of This'
Twitter share button 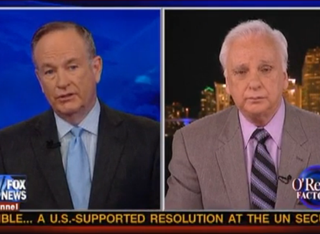 After a heated segment on the calls by conservative groups to have Ellen Degeneres removed from a JC Penney ad campaign, Bill O’Reilly invited regular Bernie Goldberg on to talk about the fight between Planned Parenthood and the Susan G. Komen Foundation, to showcase “the other side of intolerance.” But Goldberg had a few words to say about Degeneres, too– namely, that “there is a strain of bigotry running through conservative America” that he was just “sick of.”

Goldberg agreed with the parallels O’Reilly drew between the JC Penney situation and the Planned Parenthood one: “the intolerance is on the left about the abortion situation, they don’t respect people who are pro-life.” But he took a detour to comment about the former, and gave a spirited defense of LGBT rights. There is a strain of bigotry running through conservative America,” he began, “and it goes against gay people, for instance.” He continued to argue that Degeneres “did nothing wrong, she is gay… to call on somebody’s dismissal, to be fired, because she’s gay is bigotry,” and that this was not the first time conservatives had a problem with bigotry. “In the middle of the last century,” he argued, “there was another strain of bigotry on the right, and it was against black people. That has to leave the conservative movement.”

O’Reilly countered that he believed the problem was that Degeneres “flaunts” her sexuality, to which Goldberg replied “I flaunt my heterosexuality!” to laughs from O’Reilly, but Goldberg persisted that LGBT folk were “a minority that, in many parts of the world, is under attack” and “she has every right to make it a cause. There’s no agenda, she’s just gay.”

They then got to the topic du jour, the way the media treated the disagreement between Planned Parenthood and the Komen Foundation. “Andrea Mitchell and a lot of mainstream reporters don’t know these pro-life people,” Goldberg argued, “They have to understand that people who live between Manhattan and Malibu are Americans, too; they have values, too.”